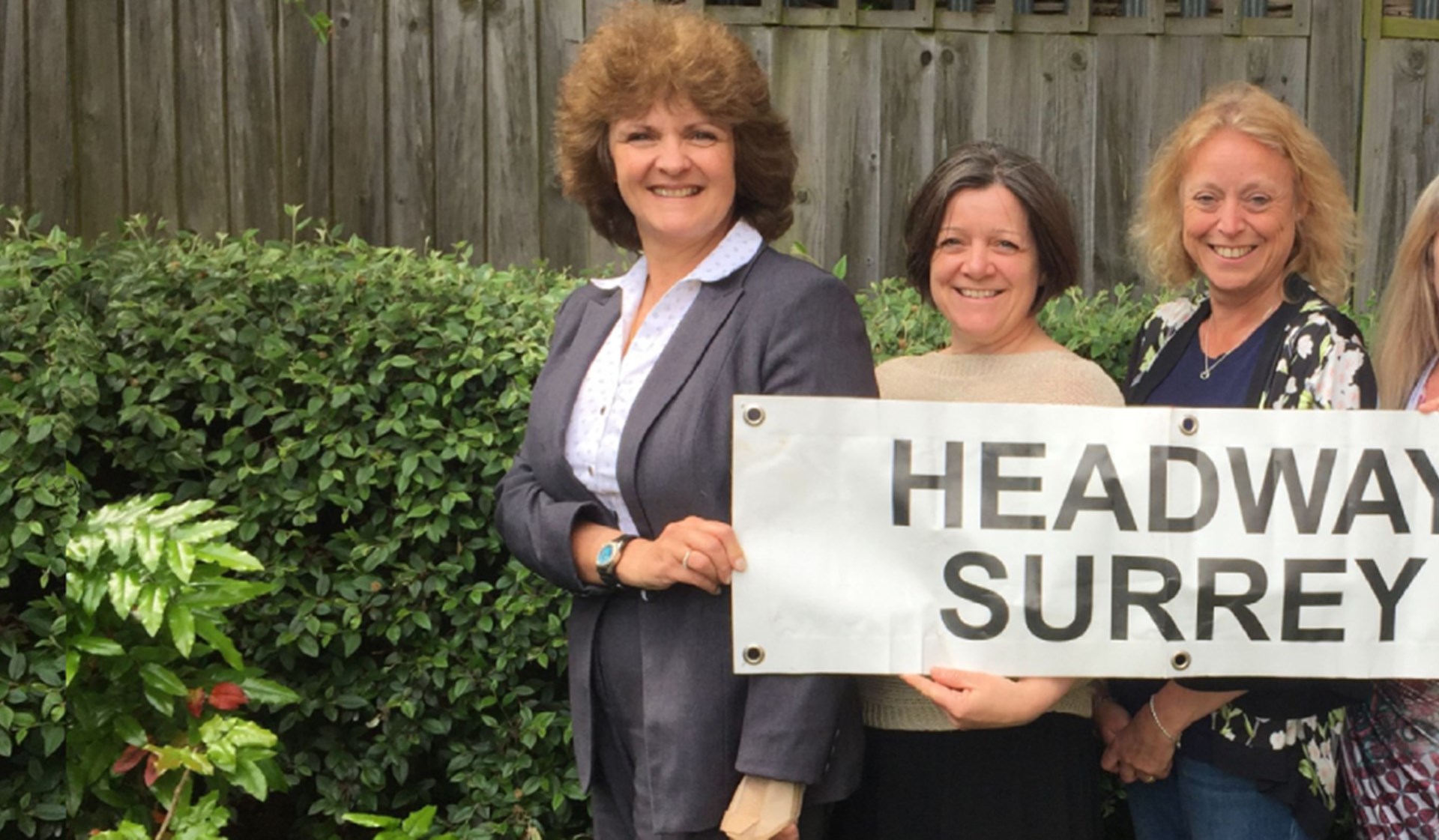 Our Board of Trustees

Dr Rebecca Bowden (aka Beccy) joined Headway Surrey in 2018 as a volunteer and Trustee.  In October 2019 she was appointed as Chairman.

Beccy is the CEO of Surrey Community Foundation and prior to this was Director of Heathrow Community Trust, a grant-making charity which helps and supports charities and community groups in the boroughs neighbouring Heathrow Airport. She is an Independent Custody Visitor for the Police & Crime Commissioner of Surrey and is an associate member of ICSA, the governance institute.

Beccy is always to be found volunteering at Drop In Sessions, fundraising events, speaking events and generally rolling up her sleeves.

Andy first started supporting Headway Surrey in July 2020 and will be official elected on 8 October 2020 at our AGM.

He is a qualified accountant specialising in charities for over 10 years, working on sizeable portfolios of both large and small charities.

Now working at Intersystems within the finance team of this  large corporation and enjoying helping Headway Surrey.

Gen is the Chief Executive of Challengers, a southeast based charity that supports disabled children and young people. Prior to this, she was the Chief Operating Officer for a national education charity. Gen is also a Trustee of Heathrow Community Trust, a grant making charity, and chairs their Young People Grant Making panel.

In her spare time Gen loves running, reading and spending time with her two Labradors.

Lou survived a severe stroke in late 2018 and joined Headway Surrey as a client in spring 2019. She has attended the centre weekly ever since then and enjoys the art sessions in particular. She has a wide circle of friends amongst the client group, and she regularly helps others with their own challenges.

By profession she is a long-standing civil servant, currently working in stakeholder engagement in the skills branch of the Department for Education. She has volunteered for various charities including Mind in Woking, where she worked as a Community Wellbeing Caller. She continues to represent and support people who are experiencing mental health problems, drawing on her own experience of two decades suffering severe eating disorders that nearly caused her death and culminated in her stroke.

With her position on the Headway Surrey Board of Trustees she represents fellow brain injury victims including the other clients she socialises with at, and outside of the centre. She is continuing her work with Mind and continues to represent service users at the Bradley Stroke Rehab. Unit in Woking. She is a role model for survivors of brain injury and she uses this experience to attract new clients to Headway in support of our Link work at various hospitals in Surrey and London.

She is adept at managing businesses through significant and complex change and transformation programmes, including brand and business revitalization, M & A, integration and rightsizing. She believes passionately in achieving business success through strong example-led leadership and people/team development.

Since January 2018 she has operated as a freelance Business Consultant and Advisor (Binocular Consulting Ltd) and also is the Chair of Hounds For Heroes.

In her spare time Mandy loves live music, theatre, ballet and cinema. She is also a keen traveller and passionate about conservation and animal protection.

Will is a survivor of a brain injury himself and he has a passion to help Headway Surrey.  Upon his return to Surrey from Hong Kong where he was Director of Academic Quality and Governance for Kaplan Inc and Academic Director China for the Consortium of North American Universities, Will became a Trustee at Headway Surrey in October 2019.

A former Head of Education and Qualifications at The Royal College of Surgeons, Will is currently Chief Operating Officer of Fosse Bank School in Kent. His support of Headway is closely linked to his personal journey of rehabilitation following his own Acquired Brain Injury.

With almost 30 years of academic and pastoral management experience Will has served on numerous charity Boards, Committees and specialist Panels including his appointment in 2005 by the then Home Secretary as Lay Adviser to Sussex MAPPA overseeing the work of the County Police, Prison and Probation services in offender management.

An accomplished public speaker, journalist and author Will has published locally, nationally and internationally and worked over the years with media organisations including the BBC and The Daily Telegraph. Will is the published author of 6 books that have raised tens of thousands of pounds for child welfare and education charities and currently he has another dozen or so books either partially written or at the editorial stage.

Louise recently joined Headway Surrey as a Trustee. Now retired, she spent over 30 years as a Senior HR Practitioner specialising in M&A in global companies such as Vickers, Warner Bros and Mercer Consulting, and ended her career working for a number of American west coast tech. companies.

She brings a vast knowledge of HR practices as well as an understanding of different cultures and excels in managing multi-cultural projects and delivering them on time.

Louise first came upon Headway back in the 1990s through a family member who acquired a head injury, and has joined Headway in memory of the work that her mother started when treatment of brain injury was in its infancy.

In her spare time, she enjoys playing tennis and golf and going to restaurant and events with family and friends.  She also loves to travel near and far and finds time to volunteer for Frimley Health NHS Foundation Trust.

Beth survived a traumatic brain injury in 2018 as a result of a fall caused by her first epileptic seizure. She joined Headway Surrey as a client in 2019. The support at Headway Surrey enabled Beth to return to work, and sessions now provide a safe space with specialist guidance to build strategies to manage a range of challenges following her injury.

As a survivor of brain injury, Beth offers lived experience of using our services and engaging with Surrey Adult Social Care and other services, which will be of benefit to the operational and strategical planning of Headway Surrey.

Beth works as a paediatric speech and language therapist for children with complex medical, physical and learning disabilities, specialising in augmentative and alternative communication. Beth has the privilege of being able to support children with acquired brain injuries and their families and uses her own experience to help raise awareness of the impact of acquired brain injuries within children’s therapy services.

Professionally Sarah works in Human Resources, she is currently Head of HR at Reach plc having worked previously at Serco and Babcock.

Sarah joined Headway Surrey in October 2019 as a Trustee. Sarah was formerly a trustee for Surrey Youth Focus and Girlguiding Surrey West and is still actively involved with Girlguiding in the local area.

Sarah enjoys helping at the Drop In sessions and meeting the clients individually.

Jennifer qualified as a Barrister in 2006 and as a Solicitor in 2008. She is a Partner in Irwin Mitchell's London International Serious Injury Team, leading a team of cross-border lawyers in bringing cross-jurisdictional cases across the globe, most of which involve multiples fatalities, complex medical negligence and/or catastrophic brain injuries. It was for this reason that she started supporting other Headway Branches in 2008 and decided to be a Trustee for Headway Surrey in October 2022.

Jennifer is a Spanish-speaker with expertise in Spanish law, having worked alongside advisors to the Spanish Government and Spanish lawyers upon the interpretation of Spanish law. As such, she is regularly instructed by Spanish and Latin American clients.

Jennifer regularly comments on TV, radio and in the press, and delivers training and lectures in the UK and abroad, especially in her capacity as a Spanish-speaker and an expert in Spanish/English cross-border law.

She also currently sits on the Executive Board of the Aviation Section of the American Association of Justice.

In her spare time, Jennifer enjoys travelling and spending time with her family.

We are currently looking for a NEW CHAIR.

To make sure we have a diverse Board we are particularly interested in hearing from persons with lived experience of a brain injury or someone who is a Headway Surrey service user, ethnic diversity, financial diversity, website skills, knowledge of CCG, clinicians (such as a neuropsychologist or neurosurgeon), young people or someone who has never been a Trustee and would like to be mentored.

Please send your CV and covering email to enquiries@headwaysurrey.org

Headway Surrey is an equal opportunity employer. Employment is based solely on a person's merit, skills, experience and qualifications directly related to professional competence.  Applications from individuals are encouraged regardless of disability, age, sex, gender reassignment, sexual orientation, pregnancy and maternity, race, religion or belief and marriage and civil partnerships.

How you can Help Us

We rely on voluntary donations to continue to provide vital services to brain injury survivors and their families. There are many ways to make a donation

Whatever your skills and experience - we can find you a role.

It is surprisingly easy to help raise funding for Headway Surrey.